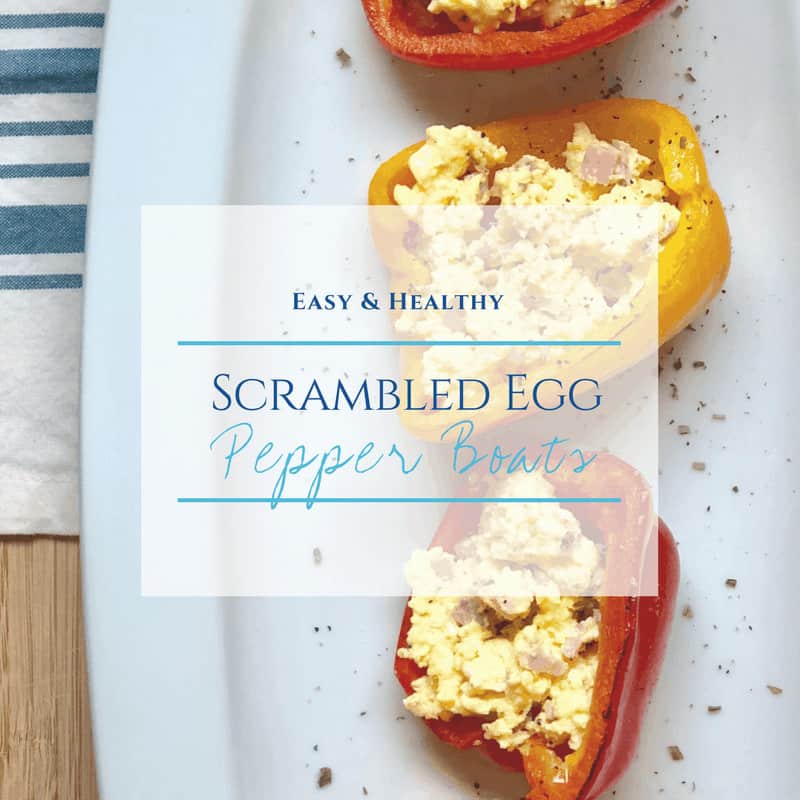 Affiliate disclosure: Sweet Humble Home is a participant in Amazon's affiliate program. As an Amazon Associate I earn from qualifying purchases. This is no extra cost to readers.

My scrambled egg pepper boats were born this morning when I had a little bit extra time to get creative!  Most days, I’ll get through our morning routine and grab a couple of hard boiled eggs and a pint of grape tomatoes on the way out the door.  Today, I had time for a little bit more.

Peppers are my new kale. Truth.

Actually, I’ve never particularly liked kale.  I tried, I really did, but it just wasn’t for me.  I’m trying very hard to get into leafy greens, but I’m not there yet.  Peppers, however; have become a new favorite, and I’m surprised by all of the different recipes I’ve come up with to use them.  Recently I came up with Pepper, Squash & Egg Breakfast Boats – they’re super yummy and easy to make as well.  This morning, even though I had spaghetti squash in the fridge, I was looking for something new.  Have you checked out Aldi’s prices on peppers? Since discovering what I could get for the money at Aldi – I’m hooked.  My fridge is full of peppers! I have also fallen in love with pepper nachos.  Yes, you read that right.  Pepper nachos.  Taylor, over at Food Faith Fitness has the absolute best recipe for Mexican Mini Bell Pepper Nachos.  There are many recipes out there, but hers is my favorite.  I highly recommend you check it out (and make them).

Not only are they easy – they’re healthy, too!

I’m not a nutritionist, nor do I claim to be, but I am a My Fitness Pal user. I entered the entire recipe into their site, which I developed for four portions. I entered the names of the products that I used when I did that, as well as in the recipe below so that I wouldn’t be guessing on nutritional value.  What I did learn is that these tasty little gems are only 98 calories each along with 10 grams of protein! Not bad!

I’m always interested in finding out if you made my recipe – and what you thought!  It’s also great to see variations! 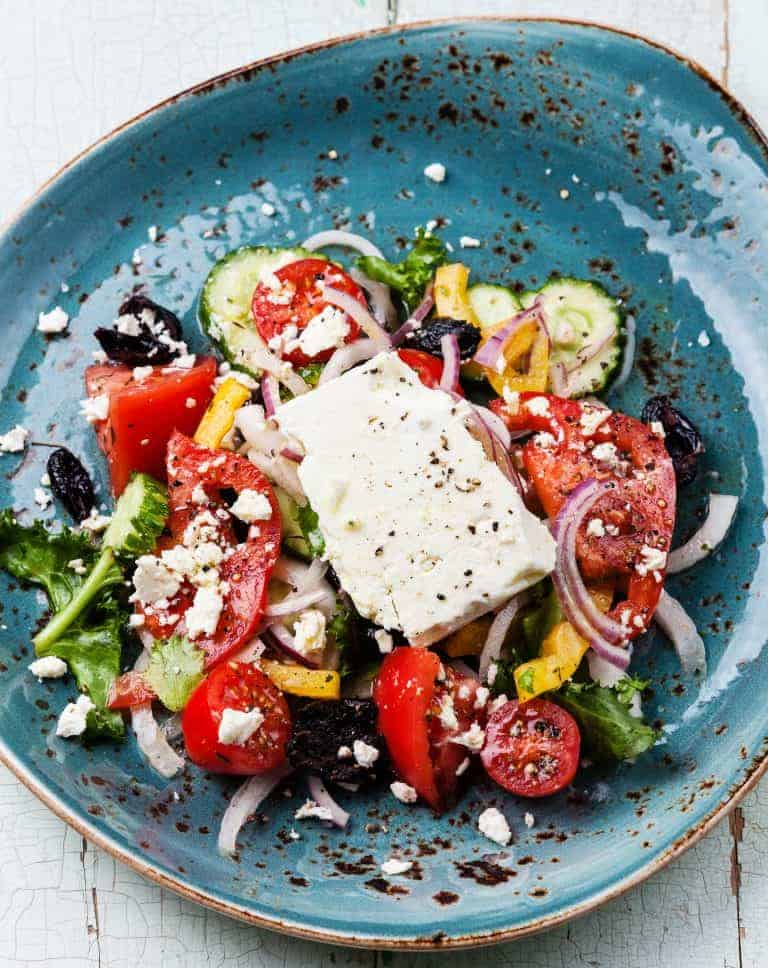 Affiliate disclosure: Sweet Humble Home is a participant in Amazon’s affiliate program. As an Amazon Associate I earn from qualifying purchases. This is no extra cost to readers. There are times that a salad is precisely what you need to round out dinner for your guests.  I’ve gathered some of my favorite easy summer salads… 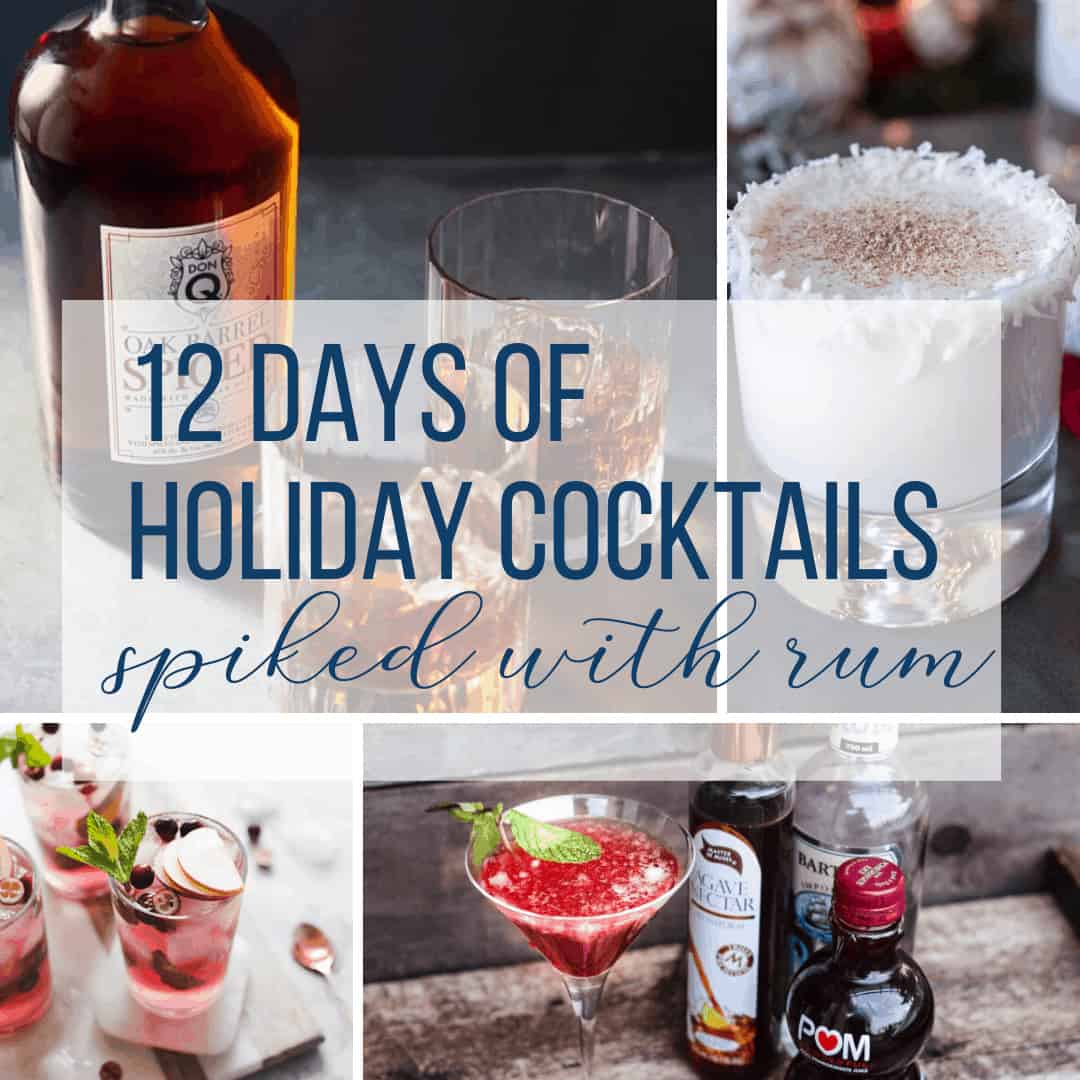 Affiliate disclosure: Sweet Humble Home is a participant in Amazon’s affiliate program. As an Amazon Associate I earn from qualifying purchases. This is no extra cost to readers.     There’s nothing like rum to give you that warm and festive holiday feeling! I’ve gathered together the best holiday drinks spiked with rum so you… 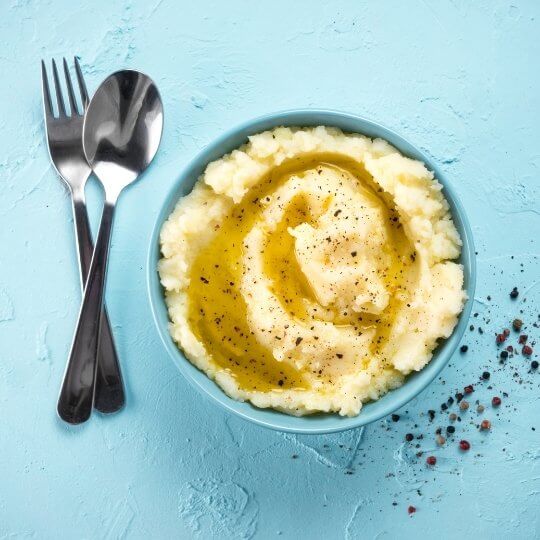 Affiliate disclosure: Sweet Humble Home is a participant in Amazon’s affiliate program. As an Amazon Associate I earn from qualifying purchases. This is no extra cost to readers.     Thanksgiving is a holiday we celebrate every year. It’s a holiday to be thankful for everything we have, and how we got it.  It’s also… 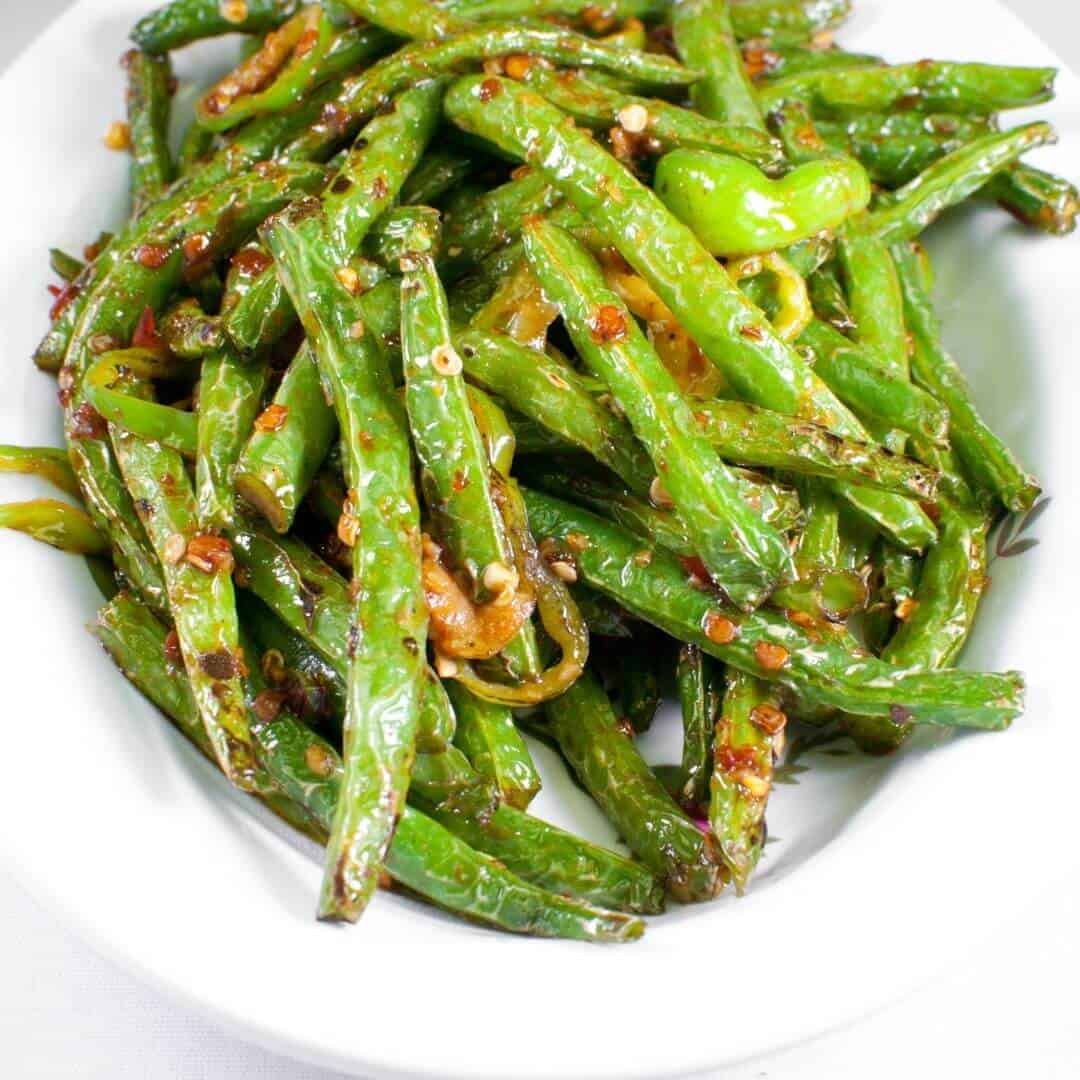 Affiliate disclosure: Sweet Humble Home is a participant in Amazon’s affiliate program. As an Amazon Associate I earn from qualifying purchases. This is no extra cost to readers.     One of the easiest side dishes I make for the holidays is this fresh Sautéed Green Beans & Garlic. There are many variations of simple green… 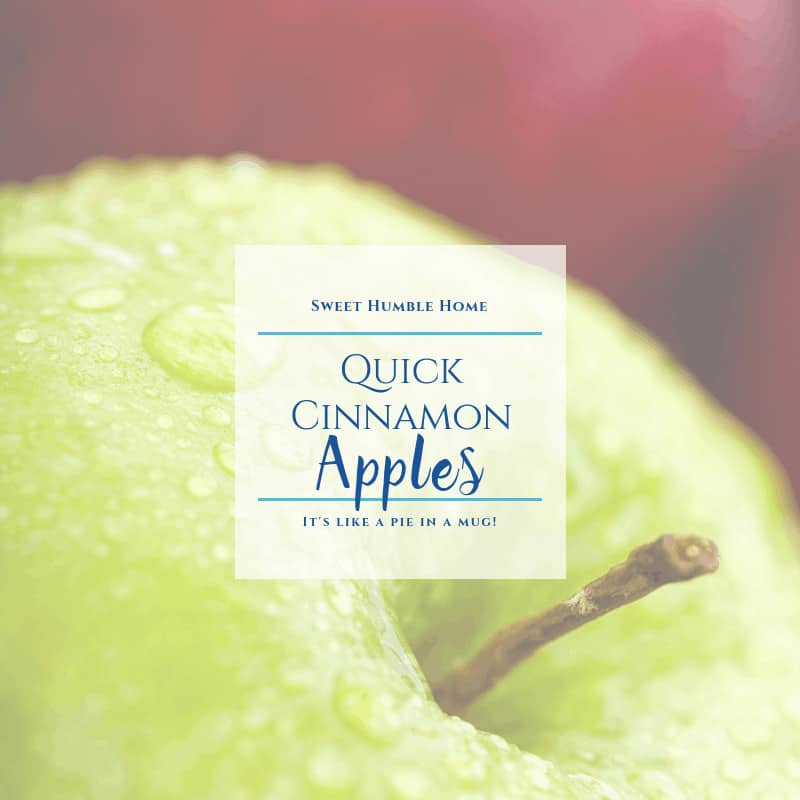 Affiliate disclosure: Sweet Humble Home is a participant in Amazon’s affiliate program. As an Amazon Associate I earn from qualifying purchases. This is no extra cost to readers.Have you ever wanted a quick tasted of autumn, but didn’t have the time to bake a pie? Autumn is my favorite time of year. Apples are synonymous… 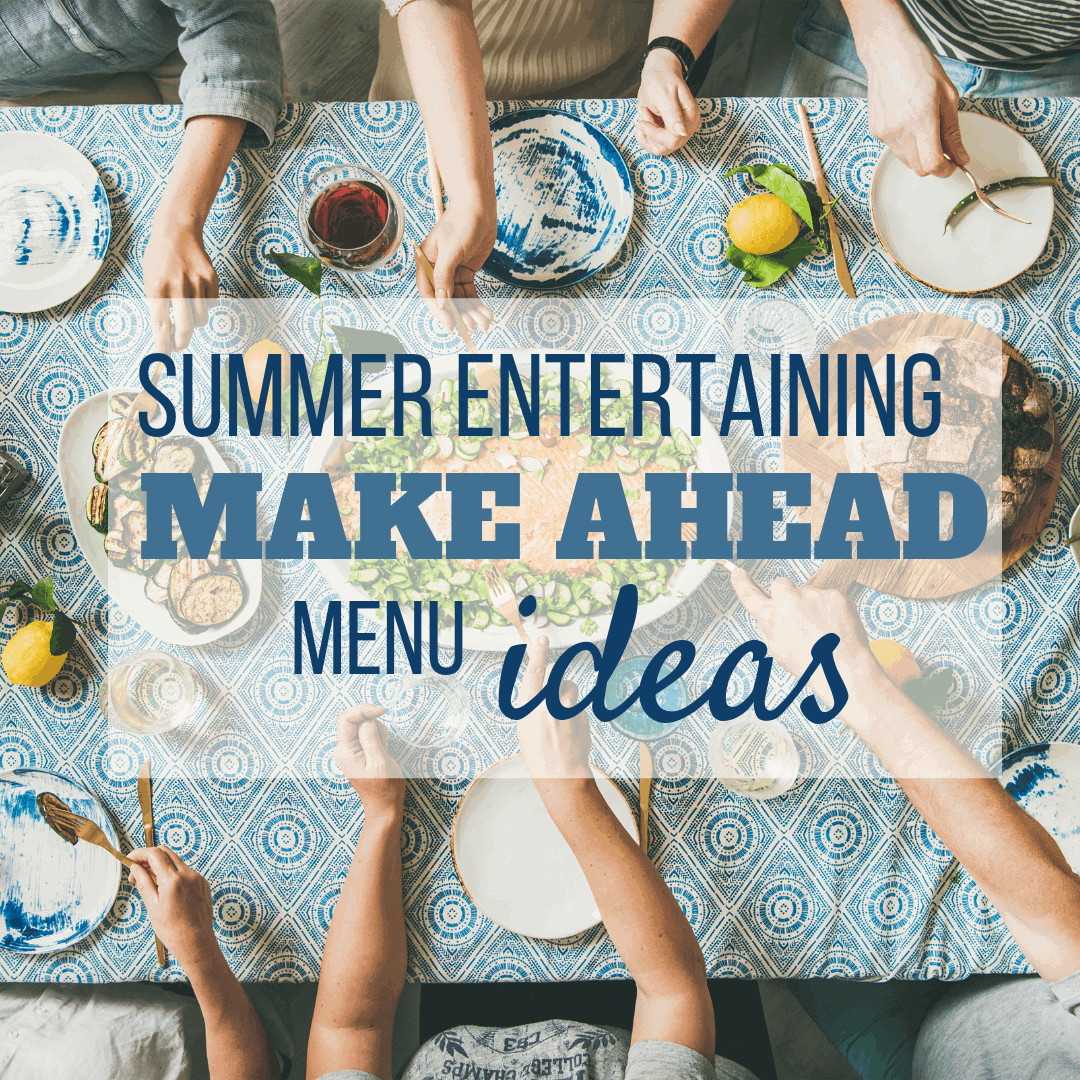 Affiliate disclosure: Sweet Humble Home is a participant in Amazon’s affiliate program. As an Amazon Associate I earn from qualifying purchases. This is no extra cost to readers.There are times that it’s just too hot to cook! However; it’s also fun to entertain in the summer because everything seems to be just a bit more…

Sweet Humble home is a participant in the Amazon Services LLC Associates Program, an affiliate advertising program designed to provide a means for sites to earn advertising fees by advertising and linking to Amazon.com.

If there had to be one flavor that defined the season, it would be cranberries.  Cranberries are the number one fruit of the season.  This recipe takes the

The holiday season can't be beat - neither can this fantastic spiked spiced rum cider cocktail! Hot Apple Cider (spiked with rum) is the perfect treat

Hi, I’m Jeannine and I love to entertain! Gathering around the table is the best part of any day. Here you’ll find everything you need to get your party planned, shared family recipes, new delicious treats, and the steps to put it all together to share with friends and family.